I know, I know – in my last post I promised a full review of Kidabra 2012, then fell silent again. Well here it is! I hope it was worth waiting for! The 21st Kidabra conference – ‘The Year of Inspiration’ proved to be the best I’ve ever attended. Tamar and I began our long journey to Pigeon Forge, Tennesse on August the 12th, when we drove up to the Manchester Airport Hilton. We spent the evening watching the olympics closing ceremony and discussing the trip ahead, which was also going to serve as the second part of our honeymoon. To cut a long story short, we arrived in Knoxville at 5.30 the next evening, picked up the hire car and drove to the Music Road Hotel. Unfortunately, our luggage had failed to arrive on the same plane as us, deciding instead to stay in Philadelphia, so the first excursion was to the huge local Walmart to buy a few essentials. All this fuss almost made us decide not to attend Dave and Sally Andrews’ Brits party, but I was really glad we did. When we opened the door we were greeted by a Krispy Kreme donut wedding cake, complete with decorative trim and bride and groom! All this was courtesy of Gus and Monica Harvett – a great couple and two great friends. We were over the moon!

It was great to see Gus and Monica again, along with GG and Charlie Siebert, Kevin Doig, Scott Thatcher and Sally and Dave, but jetlag soon got the better of us and it was time for bed. Tuesday started well, with the discovery that our luggage had been delivered to the hotel, and just got better and better. Gus and Monica had arranged for us Brits to spend the morning horseback riding, which was a first for me! I always love the first day of Biz Builders at Kidabra, because it’s fun to just sit in the hotel lobby and watch old friends and acquaintances arrive. By lunchtime we’d met up with my KGB brothers Ken Scott, Joe Romano and Mark Daniel and we were really starting to have fun. There was definitely a buzz in the air this year! The first lectures were from Kevin Heller and Brad Ross. Kevin dealt with the Pitch- selling your show. I’m no marketing expert and this proved really interesting.

Kevin Heller throwing out free stuff – I seem quite determined to catch that vanishing silk hanky!

Brad’s Facebook and social media lecture really struck a chord with me. Both Tamar and I are addicted to Facebook and there were so many good ideas in Brad’s talk that could be implemented right away. I got LOADS out of this lecture – thanks Brad! 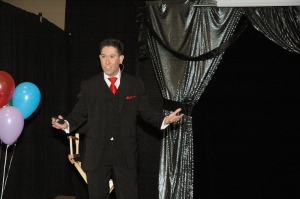 Brad looks more like a Disney character every time I see him!

After the lectures it was time to head to Terry Evanswood’s theatre to watch a special one-off performance of ‘The War Wizard’ by Max Howard. Max is incredible! He is such a fine actor and consummate professional. Everything this man does oozes class. To see him transform into Gus Rich was pure magic. I am so thrilled to have had the chance to see this amazing one man play. What a great end to day one! Wednesday opened with the second round of Biz Builders sessions. Dal Sanders gave some great advice on turning a restaurant gig into a ‘dinner theatre’ show, along with lots of practical marketing ideas. I didn’t get a chance to attend the lecture by Tom Dowling AKA Tom Phoolery, but Tamar raved about the ideas and brought back a complete set of everything that was on sale at the lecture, so I guess that’s a vote of confidence!

During Tom’s lecture I had been discussing the opening ceremony video with Ken Scott, and on Tamar’s return we set about recording and editing it. This unfortunately meant that we both missed David Farr , Dave Risley, and Jason Hudy’s lectures, but Scott raved about them, and he’s a hard man to please! Here’s a clip of the opening ceremony – along with the video we made:

After the opening comes the auction, with Kidabra’s beloved auctioneer Gary Shelton. I’ll leave you with some photos of the first two days. Part 2 coming soon!

Kevin Heller throwing out free stuff – I seem quite determined to catch that vanishing silk hanky!

Brad looks more like a Disney character every time I see him!